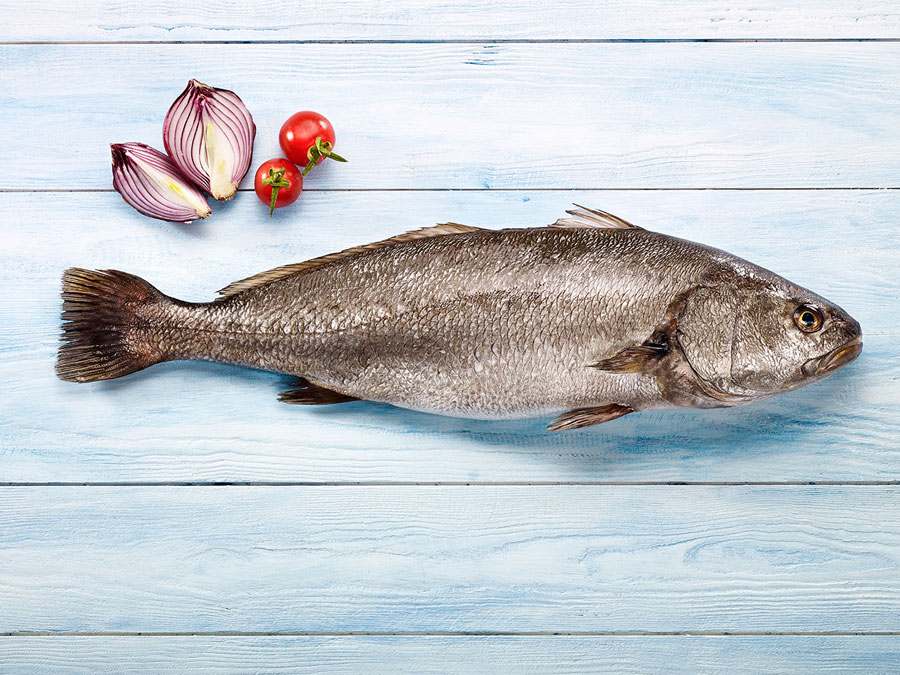 Its scientific name is Argyrosomus regius (Asso, 1801) and it belongs to the family of Sciaenidae. Can reach a length of over 2 meters and a weight of over 100 kilograms.

It is a benthopelagic oceanodromous fish that usually lives in depths up to 300 m., in reefs or even shipwrecks. It is, however, also often met in relatively shallow seabeds, with rocks, sand and seaweed beds, while it is not uncommon in brackish waters.
It is spread throughout the entire Mediterranean, the Black sea, and the Eastern shores of the Atlantic ocean while it recently migrated to the Red Sea via the Suez Canal.

It is a carnivorous fish that feeds mainly on smaller fish (clupeids and mugilids) and swimming crustaceans. 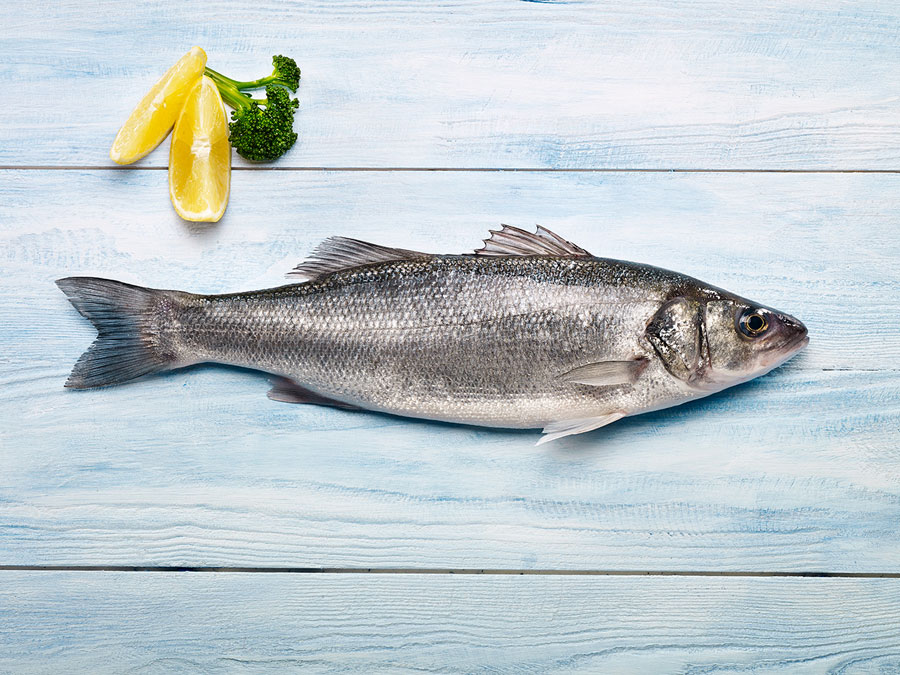 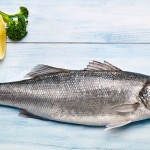 Its scientific name is Dicentrarchus labrax (Linnaeus, 1758) and it belongs to the Moronidae family. It can grow to a length of 100-105 centimeters and a weight of 12 kilos! Sea Bass can live up to 14-15 years.

European Sea Bass or “Branzino” has a silver color, its back is dark and it has a long and hydrodynamic shape. It is a wide-ranging species – in other words, a fish met both in salty waters (open sea) as well as in brackish (even fresh) waters. It usually moves in the shallow zone in depths up to 10 meters and very close to the shoreline (even though it can be found at times in much deeper waters) and prefers shorelines with sandy seaweed beds or even pebbles near river estuaries or torrents. Often, it enters rivers and will travel quite a distance. Sea Bass or “Branzino” can also be found in lagoons and vivaria. At younger ages, it forms schools that move together, but when it grows older it becomes less gregarious and can be found alone or in small groups of 2-3 up to 5-6 fish.

Its habitat is spread all over the Eastern shores of the Atlantic Ocean from Norway to Morocco, the Canary Islands, and Senegal, and the entire Mediterranean and Black seas. Sea Bass or “Branzino” is a carnivorous and predatory fish that feeds mainly on mollusks, shrimp, and smaller fish, which it preys on.

European Sea Bass is consumed fresh, grilled and boiled. Its flesh is very tasty and many find it to be even tastier than Sea Bream. As a result of its excellent taste and consistent availability throughout the year, Sea Bass or “Branzino” / “Loup de Mer” has clearly become the most popular Mediterranean fish in North America and Great Britain.

In Ancient Greece Sea Bream or “Orata”, “Dorada” (meaning “Golden” in Italian and Spanish due to the golden colors between the eyes) was devoted to Aphrodite, the goddess of beauty, as it was considered to be the most attractive and tastiest fish.

Its scientific name is Sparus aurata and it belongs to the Sparidae family. According to scientific literature, its length may reach 70 cm. and its weight 12 to 15 kilos! However, the most common weight in the Mediterranean is from 800g to 4-5 kg. It lives approximately for 10-11 years.

Sea Bream is a wide-ranging benthic species – that is, a fish that is met both in brackish as well as in salty waters and lives near the sea floor. It prefers sandy or muddy seabeds and seaweed beds; however, it can usually be found at a depth of up to 30 m., though the larger fish of the species usually move deeper (up to 150 m. depth). Its color is silver and its head in front and above its eyes is decorated with a bright golden arc that looks like a brow; hence, the names “gilthead”, “Dorade”, “Daurade”, “Orata” and “Dorada”.

It is spread all over the Mediterranean, in the Black Sea and the Eastern Atlantic Ocean from the British shores to Gibraltar and the Canary Islands. It is a carnivorous species, but also consumes vegetable matter as a consequence of its benthic diet. It commonly feeds on mollusks, mussels, and shellfish.

Sea Bream is consumed fresh, grilled, fried, boiled, or even steamed. Since antiquity it is considered to be one of the tastiest fish and a delectable dish.

By continuing to use the site, you agree to the use of cookies. More information

We use cookies to give you the best browsing experience possible. If you continue to use this website without changing your cookie settings or you click "Accept" below then you are consenting to this.